In 1956, a 21-year-old Elvis Presley would rise to international stardom.

During this time Elvis lived at 1034 Audubon Drive, Memphis, TN.

Before flying to Shreveport on March 3, 1956 with cousin, Gene Smith, Elvis writes a check for $500 toward the purchase of a house for himself and his parents at 1034 Audubon Drive, a well-to-do suburban neighborhood east of downtown Memphis. While Elvis is on tour, on March 20, his parents move into the new house. 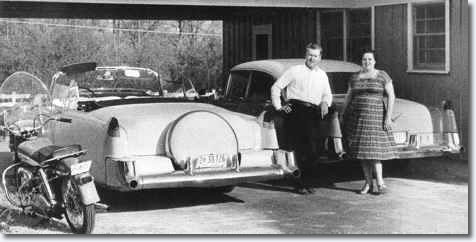 This was a time of innocence, gracious southern living and the dawn of pop culture, as we know it today.

During his 13 month stay at Audubon, Elvis became a multiple hit recording artist with RCA, movie star, teen idol, breadwinner for his immediate family, heartbreaker, award winner and ultimately homeowner with numerous additions and customizations to the property as designated by Elvis, which remain to this day. 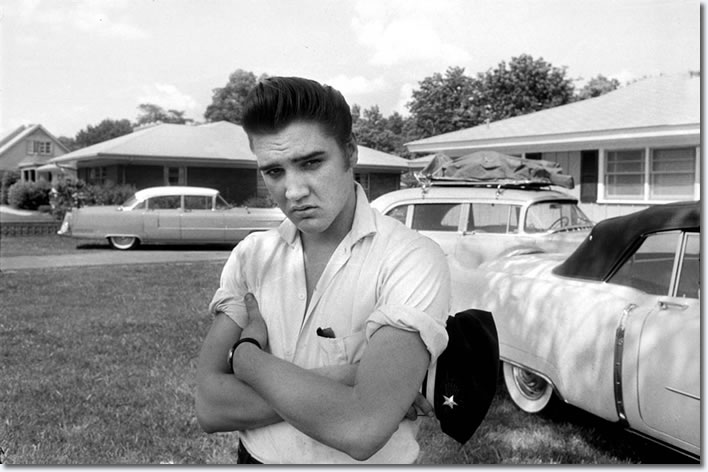 Elvis in the front yard of his home at 1034 Audubon Drive in May 29, 1956. When this photo was taken, Elvis had just returned from touring; the band’s instruments were still packed on the roof of his car.

His famous pink Cadillac can be seen over his right shoulder. 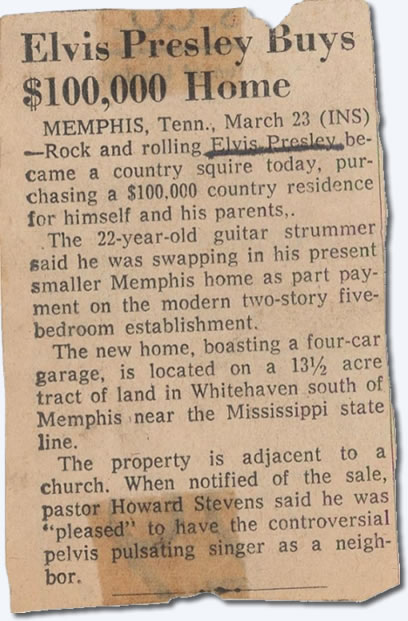 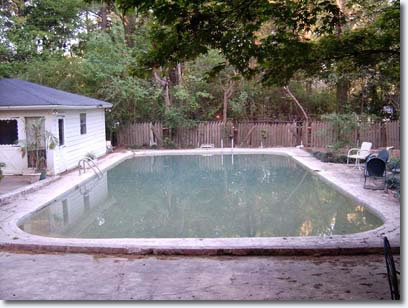 2007 picture : The backyard with the original swimming pool and pool-house Elvis had constructed for family, friends and occasional fan enjoyment.

They would have been comfortable there had their son not become the biggest show business sensation in the western world. It soon became apparent that 1034 Audubon Drive failed to provide privacy from an increasing army of fans who even started camping on the home’s front lawn. Consequently, Elvis and his parents spent much of early 1957 in Hollywood where Elvis was filming 'Loving You', which featured his parents as extras.

On Saturday, March 17, 1957, a day after they returned to Memphis, Elvis' mother and father called real estate agent Virginia Grant to see what she had to offer. Grant wasted no time. That day she showed them two properties, leaving Graceland to last. By 6 p.m. she had accepted a $1,000 deposit from the Presleys and drawn up a provisional sales contract detailing the terms of sale, including an asking price of $90,000.

Elvis surveyed the property for a few minutes, then baptized the house by playing some Rock & Roll at a piano. Elvis, Vernon and Gladys Presley signed the sales contract on the spot as purchasers. 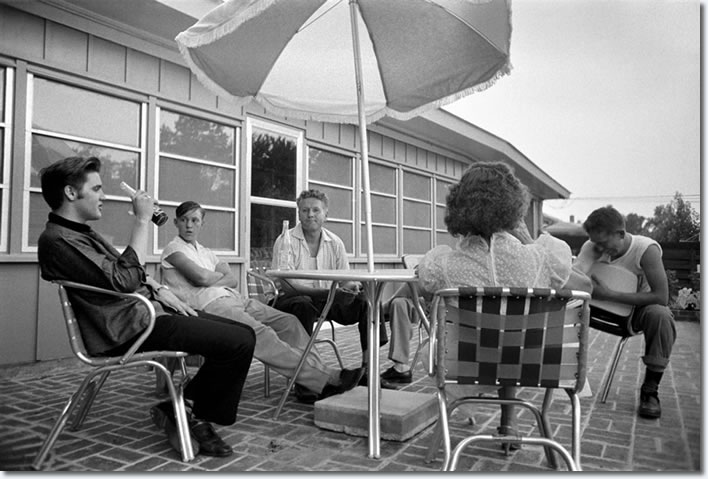 Taking a break from fans, Elvis relaxed with family on the patio of his home at 1034 Audubon Drive in Memphis. Elvis paid $40,000 for the four-bedroom, ranch-style house in 1956, a year before he purchased Graceland. On the same day this photograph was taken, July 4, Elvis also played a benefit concert at Russwood Park.

There is more information, '10 facts 'that you probably don't know' in the booklet, In The Eye Of The Storm.

I've stood aloft on this stately hill
for lo, these many years.
I've known the great joys of life
and wept its saddest tears.
I've seen the leaves turn umber
then bow to winter's snow.
I've basked in the lights of Christmas
and my pride would always show.
I've shared the kiss of a mother's love
and the paternal pride of a dad.
I've known the joy of bride and child;
thank God for the memories I've had.
My owner redefined musical history
with his unique style and voice.
I saw accolades heaped upon him;
he was clearly our nation's choice.
I've seen his fans come up the hill
and stand at windswept graves.
I, too would cry along with them;
I'd tire of being brave.
Today my columns seem more erect;
my pride shows within these walls.
My life has taken on new meaning;
his friends have come to call.
I knew that one day you would come;
I've waited and counted the minutes.
Even though my owner is away just now,
his heart is still here within it!